The devastation that hit mainly Olbia and some of the Nuoro region seemed nearly unreal when we heard of them.

I remember my mum ringing me on my mobile asking me how I was as she heard of a cyclone hitting Sardinia via the French news the day after. I had no idea whatsoever. I noticed the storm, lightning and  copious amount of rain the night before but to be honest, it was nothing we hadn’t witnessed before in Perfugas.

It is only days later , when we got back online that I realized the extend of the disaster : 18 dead , quite a few roads and bridges collapsed, many houses, business and livelihood ruined. Six months of rain slashed Sardinia in less than twenty-four hours, causing landslides, mudslides and severe flooding. 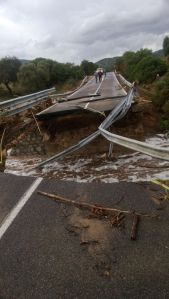 More than 4 weeks later, the effects of that disaster are still being felt : a man just committed suicide in his ruined shop in Orosei, many people having lost their home still live in temporary shelter, schools lessons are held in makeshift building ..

I know the Sardinians as very resilient people and their great spirit shone through immediately : volunteers came rushing to help from all over the island and beyond, donations of various kinds are being generously sent. It may take years to get back to “normal”. Me and Malcolm count ourselves lucky to have unaffected by it .